Once upon a time…

On June 1st in 1987 Walter sen. and Irma Räss-Koller bought the Cheese Dairy Tufertschwil from the painter Walter Dick. This day, Walter Räss began working as the works manager of the factory. In Tufertschwil since 1895 Appenzeller cheese was produced, at the beginning quarter fat cheese (15% fat minimum) called «räss», what means strong in taste and smell.

In January 1992 Walter jun. and his wife Annelies Räss-Huser took over the company from his parents.

From the beginning, all milk purveyors from the surrounding area bring their fresh milk semi-daily to the cheese dairy. Since centralisation with the Cheese Dairy Lütisburg in 1998, also purveyors from there bring their milk to Tufertschwil. The yearly amount of milk has raised from 700.000 kilogrammes to 1.1 millions. The incured whey is fed to piglets whose liquid manure in turn serves the milk purveyors as a natural fertiliser.

A great deal of attention was paid to the cheese’s quality. The manageable amount of maximum 60 loaves a day allows the producer to spend enough time on quality. The tireless effort made towards quality led to a row of awards. Not less than 16 times between 1990 and 2013, the Cheese Dairy Tufertschwil ranked in the top ten of Appenzeller cheese-purveyors. Also at national and international competition we were awarded different diploma.

In 2001, the decision to produce a cheese from pure Jersey milk would change the future of the cheese dairy fundamentally.

In begin of 2014 we decided to focus completely on the production of Chällerhoker cheese. Since June 2014 we produce exclusiv Chällerhocker and Tufertschwiler cheese in our cheese dairy. 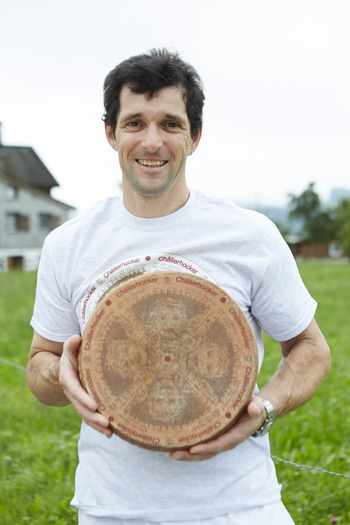